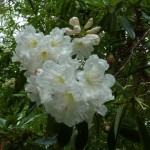 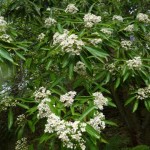 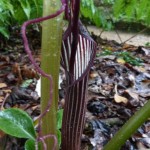 Ok its been wet,dull and damp but there are some things in the garden besides slugs that like it. Us gardeners don’t have to drag hoses around, bedding plants have been well watered in, and the Golden Orfe and the ducks in the Lilly ponds are quite indifferent to it all. But take a look at plant growth in general and it has been quite amazing. The large leaved Rhododendrons have put on lots of new shoots and the herbaceous borders are overcrowded with leaf. In the woodland floor amoungst the leaf litter and moist debris, aristocratic Arisaemas are thriving. I introduced Arisaema costatum several years ago and this year it is really taking hold. It is a native of the Himalaya, where it inhabits wet, cool woodlands…just like Abbotsbury right now!  Another plant that is flowering well this year is Photinia davidiana.This small tree called photinia was originally classified as Stranvaesia, a Latinisation of the name Strangeways, after William Fox Strangeways, 4th Earl of Ilchester (1795-1865), one-time secretary at the English legation in Vienna, who grew rare and half-hardy plants in his garden at Abbotsbury. The originalplant has long since gone but new plants were planted in the early 1990s that flourish today. The specific name davidiana commemorates Armand David, the French missionary who worked in China from 1862 to 1873. He is also famous among zoologists for his discovery of the extremely rare Pere David’s deer in the grounds of the Imperial Summer Palace in Peking.  There are still colourful Rhododendrons in flower right through June into July and Abbotsbury has a fine selection of scarlet red Rhododendron x griersonianum hyrbids, along with the large and beautiful Chinese species Rhododendron decorum with it’s white funnel shaped and scented flowers.

‘last of the summer vine’