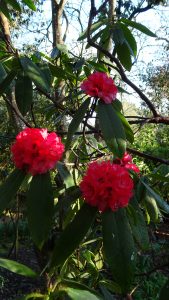 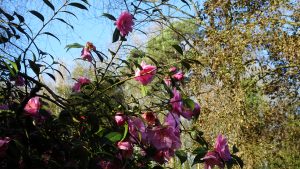 I had a quick walk about in the garden this morning, avoiding the running rills of excess water as it’s still pouring off the hills and washing the gravelled paths down into the stream. Only a couple of weeks ago we had the first real heavy snowfall to hit the gardens in eight years. The effects of the chill, the freezing and thawing are now much more apparent. Especially some of our Southern Hemisphere favourites. Plants like Pseudopanax laetus from New Zealand are looking very sad with drooping leaves and shedding bark, they may recover by breaking out new growth from the lower stems. Melaleuca armillaris is one of the Australian Honey – Myrtles and they look particularly brown and scorched at the leaf tips, yet growing alongside them are their cousins the Callistemon, which look totally none fazed by the cold weather and their course stiff leaves are still green. Another comparison is the South African Aloes. On the one hand Aloe arborescens which had a frost protection layer of fleece and carpet over it just melted into a gooey mush, yet growing next to them is Aloe striatula, another soft fleshy species which has so far not bat an eyelid to the extreme weather. These were growing on our Mediterranean bank where we recorded -5C . It must be in the Genes !!! 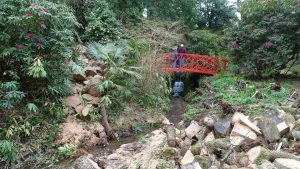 A fallen Oak tree is a casualty of the wet spring

We have had the Tree surgeons in this winter for the usual storm damage tidy up, but just recently we have had another wonderful old Oak tree collapse across the path mysteriously during the night, thank goodness it was during the night. Closer inspection has only revealed that the ground is waterlogged but the trunk and roots were not infected by any pathogen like Honey fungus so I’m blaming it on the wet weather. 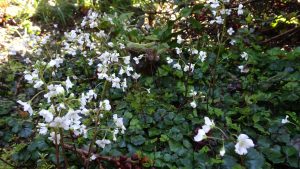 Whilst walking up through the valley it was noticeable to see how intense the flower colour is now in mid April. So many plants were caught out with the early frosts that blackened their buds that I thought we would not have a lot to see in late spring but nature has its way of compensating. The Camellias and Magnolia’s are particularly colourful, some even flowering for the very first time since planting five years ago, such as Magnolia x cylindrica ‘John Bond’ with its creamy white clusters of petals. Scarlet red Rhododendron barbatum shone out in the woodland and Pieris japonica was laden with white laces of flower. Not to be outdone are the pretty ground cover plants like Cardamine trifolia, with small white flowers standing above their spreading carpet of tiny three trifoliate leaflets. Hence their common name of “Three leaved Cuckoo plant”, presumably named years ago when the Cuckoo used to arrive  reliably every April. I do miss the Cuckoo calling. I grew up in the country and the first one to hear the cuckoo or see the first Swallow was the winner in our childhood games. Still, on my ramble this morning I was rewarded with the site of beautiful flowers and the sound of drumming woodpeckers hammering away on their favourite dead branches echoing through the woods in a morning of rare sunshine.

Well it's come around again, just as we thought we had found the last of…