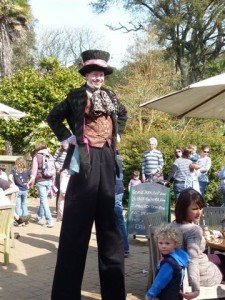 Well it’s come around again, just as we thought we had found the last of the golf tee tokens that were misplaced in the garden from last years Easter egg hunt – we were putting them out again !! Good Friday was very busy with many families making the most of the warm spring sunshine. Cream eggs were claimed in their thousands. Apart from the Chocolate bonanza and the following sugar overload in the 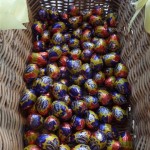 children, the parents were relieved of attention when the very good childrens entertainer came on the scene standing at about ten feet tall. He was on stilts actually, whilst blowing up sausage shaped ballons. Bamboos hoops were placed strategically around the garden, not just as an attractive low cost feature, but more practically, to try to avoid herds of stampeding little feet flattening the Hostas as their buds emerge from their winter rest. 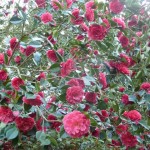 There has been a stunning display of Camellias, Magnolias and Rhododendrons for everyone to admire, and now the weather has finally got back to a more normal pattern of cooler April showers the flowers might last a bit longer. Our Camellia reticulata collection is one of the biggest in the country. This species of Camellia with their enormous flowers can be a little tricky to overwinter, so Abbotsburys milder microclimate suits them . Many cultivars originate from the 1000 year old lineage of the temple gardens of Kunming and Yunnan in South West China. Oh and by the way- We have won the Historic Houses Association -“Garden of the year award 2012” with a big award ceromony at the end of April. (More details later)