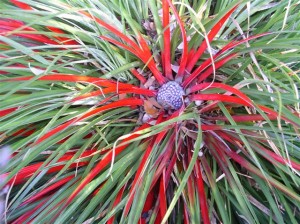 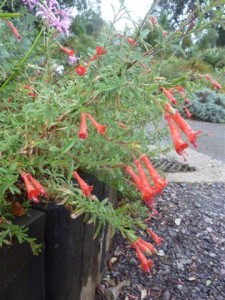 “The autumn leaves are falling fast with every squall that blows, theres lots of work in beds and border keeping gardener’s on their toes”and I’m a poet and didn’t know it !!   The garden takes on its new winter appearance as herbaceous borders fade away and give way to shrubs with coloured winter fruits and berries, but there are still some surprises with the last blasts of colour from the ‘hanger-ons’ as I call them. Last month I mentioned the Salvias, well, I could carry on about them as they are still doing their bit to keep the garden cheerful. But as I walked around the garden today two other plant species stood out with wonderful spashes of crimson and scarlet, and both of them are not really known to all that many gardeners.

Firstly,  growing in perfect drainage on our sloping Mediterranean bank we have one of the few evergreen Bromeliads that can be grown outside in Britain. Fascicularia pitcairnifolia, from the southern and central coastal region of Chile. They have spiney-margined leaves and in late summer will form a crimson rosette of leaves with metalic blue flower buds tucked down deep in the centre of the crown. A great plant for the dry garden. I did have the pleasure of seeing them grow in the wild in central Chile in 2005. As with true bromeliads many grow in the forks of trees, and in my case I saw them growing in the coastal ‘Chilean Laurel’ Laurelia sempervirens. My second plant of interest is Zauscheneria californica, also a plant requiring dry well drained conditions as this is a native to mountainous California. It may also be now known as Epilobium canum as the botanists have re-defined its name. It also has common names known as ‘Californian Fuschia’ or ‘Humming bird Flower’ as it is attractive to humming birds and has red tubular flowers a little like fuschia. This little trailing groundcover plant came into flower in late August and is still punching out the flower buds in late November. A great ‘Hanger-on’!!