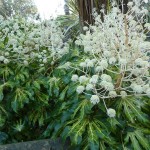 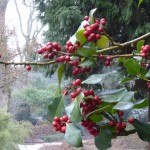 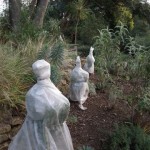 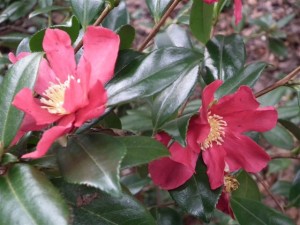 Well here we are again, we’ve finished wrapping up some of our more tenderBananas,Cycads and Palms, with still some more wood chipping mulch to go around the soft fleshy tubers of the Cannas and Hedychium. Winter here in Abbotsbury, according to past records, is often unusually mild. The presence of evergreen ‘Holm Oak’ trees act like a giant blanket over the garden,trapping warmer air and stopping penetrating air frosts. How ever, the last two winters have been much colder than others over the last ten years so we should be prepared for the worst. After a really prolonged cold spell I feel  the cold air can eventually creep in under the woodland canopy where it seems to linger for weeks on end. As a gardener who has spent many years collecting the unusual, tender and exotic plant species, it is always a worrying time hoping the big freeze will stay away long enough for the plants to pull through in the spring.

Many years ago the month of August was my real concern ! I worked in one of the hottest places on earth. This was Riyadh in Saudi Arabia. The city was surrounded by hot dry dessert, and August could bring in really hot dessert storms covering the entire city in a thick dusting of red sand, not forgetting that average daily temperatures were peaking at 50C and beyond the scale of the thermometer. My favourite trick was to fry an egg on the bonnet of my Cadillac !!  So here is another gardeners dilemma, trying to stop plants drying out and dehydrating. Any way I am digressing, my point being – every country has one form or another of extreme weather to test their plants which brings a strong case for gardeners to understand a plants needs, country of origin and the natural environment or habitat that it is normally found growing in, then it is up to you to try and replicate those conditions !!

So whether we have a real stinker of a winter or just a few light snow flurries us hardy souls who are outside 24/7 will always enjoy the beauty of the garden. Right now we have the Camellia sasanqua cultivars in full flower to cheer the woodland up along with Viburnum tinus, and Hollies with their colorful berries. Our resident flock of Firecrests can be heard tweeting in the bushes and an unusually large amount of chattering Jays calling from the tree tops. There’s never a dull moment in the garden!!

It’s the end of the year and what a busy year it has been. The…