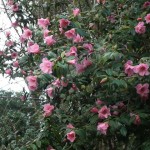 I’ve known far worse winters, although not quite so wet !!  I realize it is only early February but one senses spring is just around the corner. Snow is still predicted up north but us soft southerners are already packing away the spare bags of road salt for another year. On cool sunny days we’re venting the glass houses and watering the dormant potted plants. I’m thinking about summer displays, starting to sow the bedding seed and finishing cutting back the dead herbaceous material as the new growth is poking through the base.

As I write today there are several different species of Camellia in full flower that brighten up a dull winters day. Along with  many Magnolias that have buds fit to burst.

Camellia grijsii –A Chinese Camellia from the hill country of Fujian, Sichuan and Guangxi. It is not fully hardy but survives in the protected woodland at Abbotsbury.

Camellia yunnanensis – Another Chinese species from Yunnan and south western provinces of Sichuan. It has a long flowering period and first produced some flowers in December.The center of each flower is filled with golden stamens against 12 white petals making it look a bit like a fried egg.

Camellia ‘Bow Bells’ – This common plant is one of the first hybrid pink Camellias to flower in the garden every year. Originally bred by W.J Marchant, Dorset, in 1954. It has  a very floriferous long blooming season starting in January. 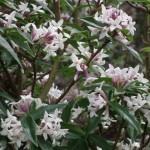 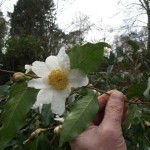 By far the most talked about plant in the garden this time of year is the sweetly scented Daphne bholua and it’s cultivars like ‘Gurkha’– a hardy deciduous form collected by Major Tom Spring Smyth at 3,200m in Eastern Nepal in 1962. A seedling from Gurkha is the more well known ‘Jacqueline Postill’ . We also grow the cultivar ‘Alba’ which has equally powerful fragrance.

Having said that about the impressive Daphnes, we still await the arrival of the most spectacular of all garden tree flowers (Well, that’s in my opinion), and that is the magnificent Himalayan Magnolia campbellii. It may be late February or early March when it’s giant pink petals adorn the bare stemmed wood. Wait this space!! or the next months blog.