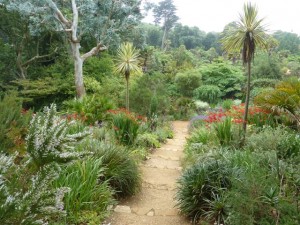 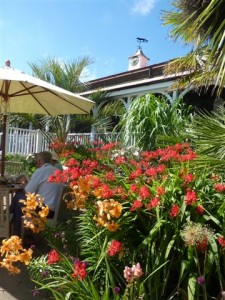 With summer temperatures rising, crops ripening and the herbaceous borders blooming, for once I got it wrong this year for booking a holiday  in sunny Greece when it has been 30 C  back here !! But to paint the scene, at 6 am every morning the owner of our rented villa would be out dragging hosepipes to water his Hibiscus, Bougainvillea and Oleanders. The vibrant colors of crimson and shocking pink are highlighted by growing alongside the whitewashed stone work and vivid blue louvered window shutters of the villa, along with its hanging Geraniums sprawling from terracotta earns alongside the swimming pool and it’s assorted sun loungers.

Ok, I know it’s not everyone’s cup of tea, but I was pleasantly surprised to see in Abbotsbury gardens on my return that we really do have a very strong Mediterranean ambiance and feel that marks us out from any other mainland British garden. The ‘Holm’ oaks that dominate the garden have a natural distribution from Portugal to Turkey and have adapted to our variable climate yet retain the seasonal habit of shedding their dried leaves all over the paths in summer. Other trees like Eucalyptus and Camphor Trees also drop leaves in summer and with the combination of sunshine and heat they produce a wonderful aromatic aroma that makes the garden almost smell continental, especially after a light shower. Architectural spiky plants provide form and texture, with plants like Acanthus mollis a native from Portugal to Italy and, prickly Puya from Chile, Yuccas and Agave from Mexico.  For vivid crimson color we grow Crocosmia ‘Lucifer’, Monarda ‘Squaw’, and Dahlia ‘Bishop of Llandaff’ in the herbaceous border. All sorts of Mexican Salvias thrive in the heat, from the giant Salvia guaranitica with blue flowers, to the bushy Salvia microphylla cultivars with scarlet flowers. We have giant Bamboo groves, Bananas, Palm trees , exotic Cannas and giant Tree ferns. From the southern hemisphere Callistemon”Bottle Brush” grow alongside Melaleuca and Hoheria. 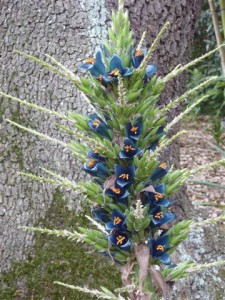 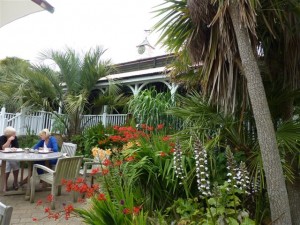 Colonial restaurant with a Mediterranean atmosphere 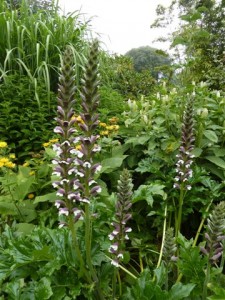 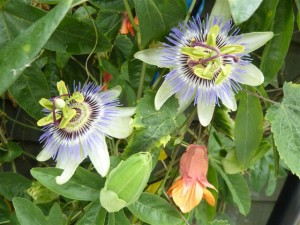 What a lovely summer it is. There have been occasional showers to compliment the heat,…

Autumn hues   Acer palmatum There is something special about the woodland garden in autumn.…