As the summer colour fades in the garden and the herbaceous borders begin to draw in the last of the autumn sun, there is an air of decline about the garden which always instills in me a sense of melancholy as the shorter days and dismal winter darkness sets in. There is of course a beauty in the countryside this time of year as fruits in the hedgerows appear with early morning mists and the beautiful autumn crimsons and yellow hues of the leaves in the trees begin to turn. Apart from popular Japanese Maples there is another favorite Japanese plant that can provide colour as well as any painters pallet and that is the “Crimson Glory Vine”  Vitis coignetiae.  This is a magnificent climbing vine with large orbicular lobed 30cm deciduous leaves that turn yellows to crimson. It is a native to the mountains of Japan and Korea. 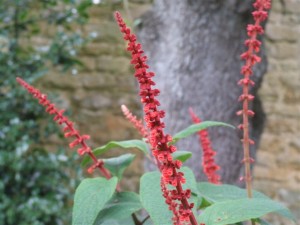 There are still a few other performers with late flower here in the first week of November. Salvia confertiflora seems to flower until the first frosts. It is a tender Salvia from Brazil which will need insurance cuttings to overwinter under glass for next years plants. 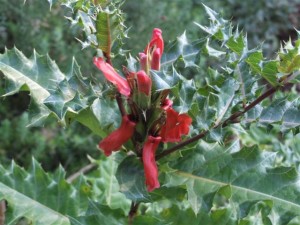 Another less well known red flowering herbaceous plant that I sourced from a private collector several years ago is Acanthus sennii . This striking prickly herbaceous Acanthus is a really late flower in the border but is worth waiting for. What is really remarkable is the fact that it seems relatively hardy in the British Isles considering its native home is in tropical Africa. But then it has been found growing and collected at 1700 – 3200m above sea level in the Ethiopian Highlands so there must be a degree of cold tolerance in its genes.

Finally one other plant I noticed on my garden walkabout that is well worth a mention and that is Nicotiana mutabilis, a member of the Tobacco plant family. 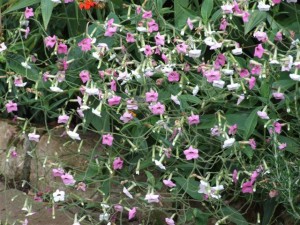 This is one of the best performing flowering plants around. Grown from seed originally given to me from the well known herbaceous nursery grower Derry Watkins. It is treated as an annual but in milder gardens it can overwinter as a perennial. Our plants started flowering with their multi- coloured pink and white flowers in May and right through continuously to early November.

In the last week we have suffered storm damage in the garden with several old trees blown down and many limbs torn from trees. As if we have not got enough work to do already, the clearing up process will take several weeks before we can get around to more garden improvement projects. Still we must take every months seasonal changes with a degree of tolerance but if we were to believe the headlines of the Daily Express then we are in for an arctic blast in late November. Please give us time to wrap up or put to bed some of our more tender treasures first !!!!

‘At last there are signs of Spring in the air’

I had a quick walk about in the garden this morning, avoiding the running…

Abbotsbury gardens can be a real haven for wildlife, especially passing migrant birds. This year…