What a lovely summer it is. There have been occasional showers to compliment the heat, the fields are full of golden brown wheat looking splendid against a blue sky backdrop, and garden flowers exuberant in the summer sunshine. Following a relatively mild winter we then had a wet spring, it’s no wonder our gardens are thriving this year. These are the perfect conditions for nature to provide us with welcome surprises like the recent discovery of our Loquat trees producing fruit.

The ‘Loquat’ tree, Eriobotrya japonica, originates from the warmer parts of central or south eastern China, and have been cultivated in gardens for over a 1000 years being the subject of silk paintings of the Southern Song Dynasty (1127-1279) In more northern gardens we grow them for their large glossy leaves and ornamental qualities but in warmer parts of the world like the Mediterranean basin, central America or South Africa they are grown for their fruit. 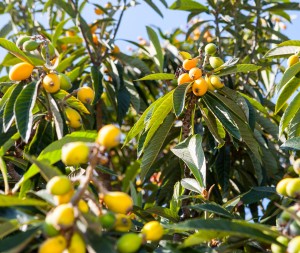 The unusual thing about this plant is that it flowers in late autumn and sets fruit throughout the winter months. Last winter being so mild meant that the fruit actually set and continued to grow with the warm summer. The fruit taste’s of a mixture of Citrus and mild peach. It is often seen in market stalls throughout Asia where there are reportedly meant to be over 800 different cultivars. Loquats are abundant in Pakistan, from Islamabad north, during the month of April, where the sour unripe fruit are used to make chutneys and sauces.

Another favorite ornamental plant grown in this country for its lush giant leaves and exotic qualities is the Japanese Banana, Musa Basjoo. Right now ours have flowered with an enormous inflorescence, producing both male and female flowers on the same stem. 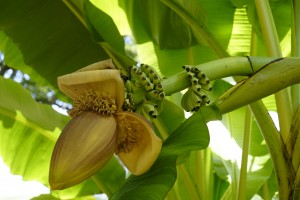 Although the leaves are a thick fleshy pseudo stem, it is really a giant herbaceous perennial that can be susceptible to frosts in winter. However the fleshy root stock can tolerate severe cold once it has been protected with a thick layer of organic mulch. Once it has established, even if a cold winter has frosted the stems and leaves it will normally re-grow new shoots from the roots quite rapidly the next spring. 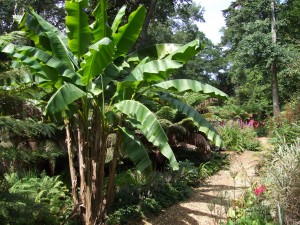 In Japan these Bananas are grown for their fiber- as their fruit are un-edible! The fibers are extracted by cutting the long fleshy stems lengthways which are then beaten, bleached and dried to make “Banana Cloth” and then made into paper, carpets or even Kimonos.

One other unusual crop found growing in Abbotsbury is the “Taro” Alocasia esculenta. By chance I read that it associates with the growing conditions of rice ie) in shallow water keeping the roots cool and moist. We tried it many years ago in a gently trickling stream that flows from the lily ponds where the soft fleshy roots and enormous ‘Elephant Ear’ shaped leaves emerge every spring. 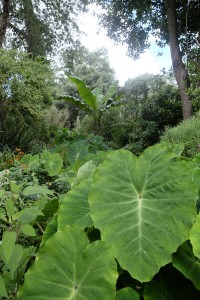 It is a staple food in African and Southern Indian cultures and is believed to have been one of the earliest cultivated plants. It is mainly grown as a root vegetable for its starchy corm and also to be eaten as a leaf vegetable. The plant is inedible when raw and considered toxic due to the presence of calcium oxalate calcium crystals. The toxin is minimized by cooking especially with a pinch of baking soda.

Taro was consumed by the early Romans in much the same way the potato is today. They called this root vegetable colocasia. The Roman cookbook Apicious mentions several methods for preparing taro, including boiling, preparing with sauces, and cooking with meat or fowl. After the fall of the Roman Empire the use of taro dwindled in Europe.

“Taro” is also called “dasheen”, in contrast to the smaller variety of corms called “eddo” or “tanya” in the English speaking countries of the West Indies, and is cultivated and consumed as a staple crop in the region. Our plants die down at the end of the year with the roots being protected by the shallow running water over the winter months. Many times I have thought they would not survive the cold especially after the winter of 2011 where temperatures dropped to -7C, but like a ‘Pheonix out of the fire’ they re-emerged in May.

My thanks to Wikepedia for some of the above mentioned information, it is amazing how the internet has changed our lives, even us gardeners can access info in a matter of seconds. However most of the photos come directly from my camera which come in handy for an instant record of any specific flower looking good on the day, to be stored in ‘digital time and space’ for the likes of Twitter and Facebook !!

A hint of ‘Spring’ in February

I've known far worse winters, although not quite so wet !!  I realize it is only early…