It’s the end of the year and what a busy year it has been. The gardens have achieved remarkable longevity as they are 250 years old this year and they are still managed by the same family many generations later. We celebrated by holding events in the garden throughout the year and to finalise the season we had “The Abbotsbury Gardens Story” published in November.

This book has been an ongoing recollection of my involvement with the gardens restoration, investment and development. It also reflects over ten years of research and detective work to piece together snippets of information about the Earls and Duchesses of Ilchester and succeeding generations of the Ilchester family that were connected with the gardens of had any horticultural influence.

As I sit here in my garden office on Christmas Eve morning the rain is hammering down in a stormy warm south westerly gale. Bedraggled Pheasant are wondering through the puddles and dead leaves are scattering in the wind. The talk is of how mild the weather is for the time of year, certainly no stereotype white Christmas this year!

I thought I’d end the year with an extract from my book, a piece on the weather. Something us British love to talk about at any given moment.

“Further generations of Fox-Strangways kept the Gardens maintained as a ‘pleasure garden’ for guests and to indulge their passion for plants. However, on 23 November 1824 a violent storm hit much of the south coast and was referred to as the ‘Great Storm’. It was documented in various newspapers and caused quite a sensation at the time. In the book Elizabeth Lady Holland to her Son (edited by the 5th Earl of Ilchester) it states that Lord Ilchester ‘lost his decoy or Swannery entirely’:

The embankment gave way, and the whole is filled with sea and shingles. The house at Abbotsbury was filled with wretched shipwrecked mariners of all nations. Happy for them to meet with shelter and hospitality.

The height of the sea which had been forced over Chesil Beach by the violence of the waves was 22 ft 8 inches above ground at the entrance to the Swannery. It is recorded that ‘38 pheasants were picked up drowned, besides hares, rabbits, mice, etc innumerable’. There was little reference to the Gardens at this time, presumably because the trees were still quite small in most of the plantations and no mature specimens were there to be blown down. In a letter dated 4 January 1825 from Lady Elizabeth Fielding to William Henry Fox Talbot she says:

On leaving town I went first to Abbotsbury where the late storm has changed the face of nature. The bank of pebbles is greatly lowered and will remain so in future for centuries to come. I saw a boat in the middle of a ploughed field far from the sea. The swans were dispersed far and wide. Fleet church which had stood 500 years was washed away. In the village of Chesil 36 houses were washed away. The sea reached Wyck wood far inland. They are going to erect stones to mark to future generations the points the sea reached. The boathouse at Abbotsbury was the only building on the beach that survived the storm from Weymouth to Sidmouth. 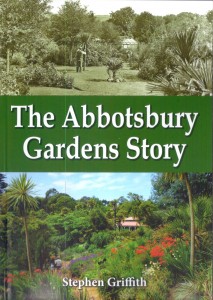 Have a very happy Christmas and New Year.

The merry month of May