The gardens have seen a steady flow of visitors this year right through from the early Magnolias Rhododendrons and Camellia flowering time in the spring, through to the high summer with colourful perennial borders, Hydrangeas and Roses. 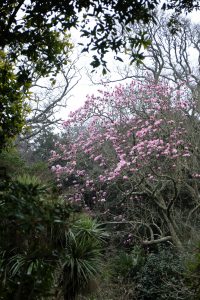 This is one of our stunning old specimens of Magnolia campbelli in flower in late February.

There have been cruise ships calling into Portland harbour bringing a wealth of visitors from all nationalities, coachloads of German and Dutch gardeners and a few more Chinese’s visitors this year. When I first started working at Abbotsbury in the early 1990s I remember the garden having a great atmosphere with its winding paths and undulating hills and dark shrubberies full of Camellias. There were great swathes of Rhododendron arboreum growing everywhere, some fallen from past storm damage yet still growing as a layered bush.

Giant Holm oaks sheltered the valley as they do today and stunning old Magnolia campbellii trees that can flower as early as late February in some years with pink flowers the shape and size of a tea cup and saucer.

Yet, this was very much a spring garden like so many of the Cornish ravine gardens. Everything exploding into drifts of colour throughout March April and May and by early to mid- summer they became an oasis of green – except for the odd splash of blue Hydrangea. There were some old shrub roses that did their best to provide some colour in June but very little else. So when I look at the garden today I think we can all take some pride in the way the garden has transformed into a garden for all seasons with something rare and beautiful coming into flower at any time surprising the visitor on every corner.

It seems ages ago when the planning and discussions were taking place about improving the concept and facilities for increasing Weddings in the garden. After identifying a suitable site for a permanent Wedding Pavilion we then had to sell the concept to be approved by so many authorities. 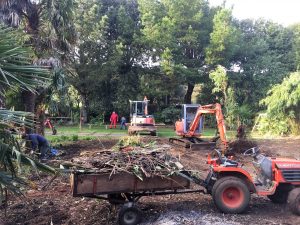 Starting to prepare the site for the new Wedding Pavilion

Once the go ahead was given we began to dig up and transplant as many plants as we could from the site before the heavy machinery moved in. The ground preparation and concrete footings were the main concern and once completed the marquee team arrived to erect the Pavilion which only took three days to complete. There were early concerns over the brightness and shiny effect from the grey pvc coating, yet several months on, the roof has blended into the landscape as the new subtropical planting surrounding the pavilion has started to grow and settle in. 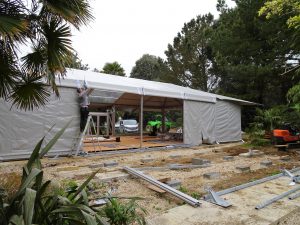 Construction of our permanent marquee 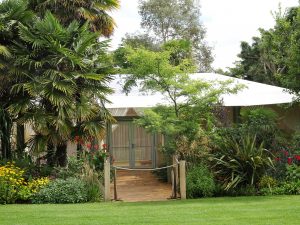 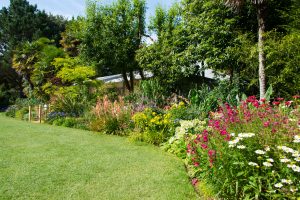 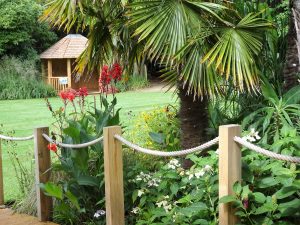 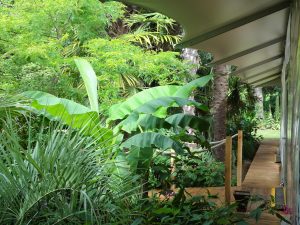 It’s August and ‘School’s out for Summer’